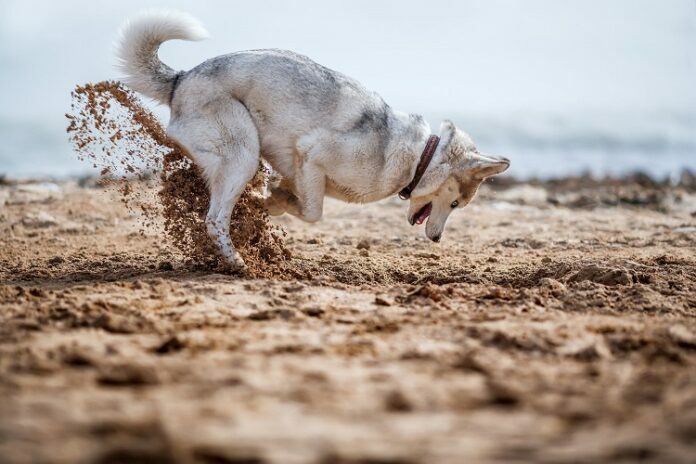 Dogs dig holes for many reasons. Some dogs dig holes to create a cool place to lie in during the summer, while others may dig as a way to bury their food or toys. Some dog breeds, such as dachshunds, are bred specifically for their propensity to dig burrows. Holes dug by dogs can present a problem when they are deep enough to cause damage to property or when they are located in an area that is meant to be kept clear of obstacles, such as near a pool.

There are a few things you can do if your dog is a habitual hole-digger. If your dog is digging primarily out of boredom or because he is seeking shelter from the sun or wind, provide him with plenty of appropriate toys and outlets for his energy. If your dog is digging where he isn’t supposed to, try placing some deterrents in the ground around the affected area, such as chicken wire or cinder blocks. You can also train your dog not to dig by providing positive reinforcement when he does not excavate an area.

How do I stop my dogs from digging holes?

There are a few things you can do to stop your dog from digging holes. One is to provide them with an alternate activity to engage in, such as playing fetch or taking a walk. You can also try training your dog not to dig by using positive reinforcement methods such as treats and praise. If your dog continues to dig despite your efforts, you may need to resort to using a deterrent such as a citronella spray collar or fencing off the areas where they are prone to dig.

Do dogs dig holes when they are stressed?

Every dog is different and may react differently to being stressed. However, some dogs may dig holes when they are feeling anxious or stressed as a way of coping with their feelings. This can be problematic if the dog starts digging holes in your yard or garden, as it can damage property or create an unsafe environment. If you have a dog that tends to dig holes when they are stressed, you may want to consider investing in a kennel or other designated spot where the dog can relieve their anxiety without damaging property.

What breed of dog likes to dig holes?

Many dog breeds enjoy digging, but some seem to take more of a liking to it than others. Heavy-coated spitz-type dogs, such as Huskies and Chow Chows, often love to dig holes. This may be because they were bred to hunt in colder climates and used their powerful digging abilities to create dens in the snow. Dogs that were originally bred for hunting or herding also tend to enjoy digging; this may be because they are instinctively trying to create a safe place for their animals or flock. Some smaller breeds of dogs, such as Dachshunds and Corgi, also like to dig, most likely because they inherited this trait from their larger counterparts.

Why do dogs dig holes in the yard?

There could be many reasons why dogs dig holes in the yard. It could simply be an innate behavior that they enjoy, or it could be a way for them to communicate something to their owners. Dogs may also dig holes as a way to escape from potential danger or as a way to cool off on a hot day.

One possible reason why dogs might enjoy digging holes is that it’s something they’re born with. All canines, whether they are domesticated or not, have an instinctual urge to dig. This may be because digging is how dogs originally hunted prey – by excavating burrows where small animals like rabbits live. Even today, many dogs still instinctively enjoy digging and will do so whenever they get the chance.

Another possibility is that dogs dig holes as a way of communicating with their owners. For example, if a dog digs a hole in the backyard and then barks at it, this could be his way of telling his owner that he’s found something interesting. Alternatively, if a dog digs a hole next to his owner’s feet while they’re sitting outside, he might be trying to tell them that he needs to go to the bathroom.

Why do dogs dig in bed?

One of the most puzzling behaviors that dogs exhibit is their tendency to dig in bed.

The answer lies in dogs’ natural instincts. Dogs are descended from wolves, and wolves use digging as a way to create comfortable beds for themselves. By digging in bed, dogs are simply following their evolutionary heritage and trying to make themselves more comfortable.

In addition, dogs may also dig in bed as a way of marking their territory. By leaving bits of their scent in the bed, they are essentially “claiming” it as their own. This can be interpreted as a sign of dominance or insecurity, depending on the individual dog’s personality.

Whatever the reason behind it, there’s no doubt that dogs’ habit of digging in bed can be annoying for homeowners.

Improving Your Dog’s Quality of Life

Choosing Dog Care for Your Dog

Why Do Dogs Dig Holes?

Evelyn Townsend - January 27, 2023 0
Dogs dig holes for many reasons. Some dogs dig holes to create a cool place to lie in during the summer, while others may...

dogs-info - January 2, 2023 0
Having a family dog is always a good thing, especially because it doesn’t take them long to become an important part of your family....

Evelyn Townsend - October 1, 2022 0
Introduction You are not alone if you enjoy hockey! Hockey is a famous sport in the United States and other countries. So, since you enjoy...

Long-Haired Dogs Should Be Regularly Groomed

Evelyn Townsend - September 23, 2022 0
Share If your dog has long hair, you need to have it regularly groomed to keep the hair from matting. You need to wash your...

What You Should Know About Boarding Your Horse

Caring for Your Senior Dog

Which Dog Breed Is Right for You?

Where to buy marmoset monkeys online